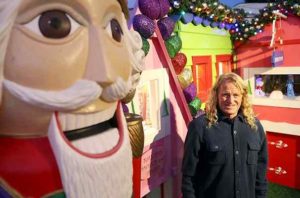 Q-Tips say: Great place for kids of all ages. It is FREE but donations are accepted. Farley himself is there to answer questions or just enjoy watching everyone else enjoying his Christmas wonderland. Farley, THANK YOU,  Farley.

House  background:  As a young boy, Christmas was always a big celebration for Pat Farley.

Everything about the holiday was magical. From picking out the perfect Christmas tree to going into the city with his mom and brothers to see all the big Christmas displays and decorations in the downtown storefronts.

“When everyone else was asleep, I loved plugging in the Christmas tree and just sitting and staring at it all lit up,” Farley said.

Then at the age of 9, everything changed. Shortly before Christmas, Farley said he lost two sisters who died within 10 days of each other. After that, Christmas was never the same for the family. “We would always get a tree but the Christmas spirit was killed,’ said Farley. “My parents never got over it and it became too hard for them to handle.”

Farley, now a 66-year-old veteran and Seabright resident, served with the Rangers in Vietnam.

In 1968, Farley drifted farther away from any Christmas spirit. “I was hunting Viet Cong in the Mekong Delta in Vietnam during the ceasefire. We hoped we would have got a day off from the war, but it didn’t happen and that just made me a little more combat hardened and bitter in those days,” he said.

For the next 20 years, Christmas meant that he might get together with a couple of his brothers, but it didn’t happen too much, he said. “After my father passed away, my mother remarried and would try and get us to come by during Christmas, but I wasn’t into it,” Farley said.

The Christmas spirit finally came back for Farley about 10 years ago when his wife Jennifer took him to Disneyland for three days to celebrate Veteran’s Day. Entering the park on the second day there stood an enormous Christmas tree fully decorated, with garland draped on all the buildings, Farley said. “It was beautiful. I didn’t want to go home, I just wanted to park it right there and stay.”

Knowing he couldn’t live in Disneyland at Christmas, and having a carpentry and surfboard/fiberglass background, Farley set out to create his own holiday Disneyland. Every year it keeps getting bigger.

“I took tons of pictures of all their building and creations. I wanted to make everything here as if I were a Disney Imagineer.” Surfing used to offer him a legitimate excuse to “get away,” he said but now Farley creates his own Disneyesque Christmas wonderland at home to escape to.

His yard features a 20-foot artificial tree and life-size nutcrackers standing at attention. There’s also a Toyland, a log cabin where Santa and Mrs. Claus stay, a Christmas tree forest, and his wife’s fairy grotto complete with a fog machine.

“Where you have Elfs you have fairies in a fairyland with fountains.” Farley said. Inside the house he created a miniature Christmas land, making mountains out of surfboard foam and adding little buildings dotted with lots of colored lights. When the economy took a nose dive, Farley said he was able to pick up a few big, inexpensive artificial Christmas trees and created a forest. “Inside the forest I made elf houses and made them as if I were building a house to sell, leaving out no details. I logged the wood to build one and made the stones for another. I wanted my very own Disneyland here,” Farley said.

Fortunately Farley is retired he said, because it takes two months to set up and that’s working full time. He also has about 30 artificial trees ranging 9 feet to 20 feet. The hard work is carrying sections of the tree up a ladder and leaning over and stacking the trees, Farley said. He spent all of 2015 working on the log cabin, Toyland, and doing maintenance. With everything coming out of storage in September, some of it does not get stored until February.

When we started this, my wife and I did it for us — we’re artists and wanted to create something. We didn’t think about what the public would like. And because we’re hidden it took the world a few years to discover us. So in 2013 Farley opened it up to the public.

This year, he opened the gates Dec. 5 at his Seaview Avenue home in Seabright. “I have thousands of people come through and most everyone loves it” Due to vandalism over the years, Farley does accept donations for all the upkeep. The manufacturer Department 56, which sells Christmas and holiday collectables worldwide, even recognized Farley as being one of the top 10 Christmas displays in the country.

“Living on a pension there’s only so much I can afford. If I had to still work there would be no Christmas wonderland here — it’s a lot of work setting up however,” Farley said.

This entry was posted in California Events/Restaurants, Travel. Bookmark the permalink.