B. Excursions – Walking the various trails, a trip to the Ghost City in Jerome Az., a Verde Mesa Train Ride, a couple of trips for shopping, a trip to the Montezuma Castle & Mountezuma Well (both of these were excellent) as was The Chapel of the Holy Cross & Tlaquepaque  Chapel and courtyard portrays the flavor of Old Mexico  & Tlaquepaque Arts Crafts Village. Thanks to our son, Sean, for doing all the driving! 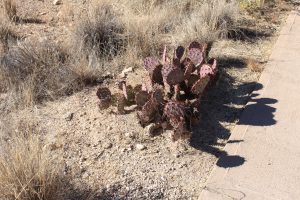 When cactus turn red, they are diseased.

Montezuma Castle National Monument protects a set of well-preserved dwellings located in Camp Verde, Arizona which were built and used by the Sinagua people, a pre-Columbian culture closely related to the Hohokam and other indigenous peoples of the southwestern United States,[4] between approximately 1100 and 1425 AD. The main structure comprises five stories and twenty rooms, and was built over the course of three centuries.  Neither part of the monument’s name is correct. When European-Americans first observed the ruins in the 1860s, by then long-abandoned, they named them for the famous Aztec emperor Montezuma in the mistaken belief that he had been connected to their construction (see also Montezuma mythology).[6] In fact, the dwelling was abandoned more than 40 years before Montezuma was born, and was not a “castle” in the traditional sense, but instead functioned more like a “prehistoric high rise apartment complex.” The Chapel of the Holy Cross is a Roman Catholic chapel built into the buttes of Sedona, Arizona, run by the Diocese of Phoenix, as a part of St. John Vianney Parish in Sedona 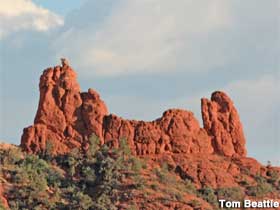 This entry was posted in Sedona Events/Rest.. Bookmark the permalink.