HAVANA – The city was founded in 1519 by the Spanish and by the 17th century it became one of the Caribbean’s main centers for ship-building.

Our morning tour began with a visit to the Fine Art Museum “Museo de la Revolution.” Housed the former Presidential Palace, and is devoted to the revolutionary war of the 1950’s and the country’s post 1959 history. Then a stop at the outdoor installations of legendary Cuban ceramicist and graphic artist Jose Fuster, a pioneer of Cuban visual art.

After lunch, there was a discussion of the visual art scene in Cuba, the Museums. Dinner then a performance by the Cuban performers and a “nighcap” to talk about our day.

Inside the Museo de la Revolution 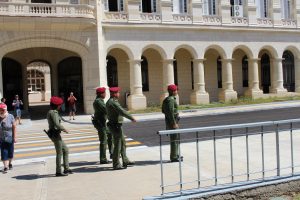 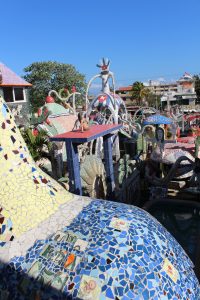 Outdoor installations of Cuban ceramicist and graphic artist Jose Fuster. He lives here in a very tiny home and opened his house to visitors. Pictures are allowed but not of his private residence. Mrs. Q says, his residence is very tiny. He gives any donations to other artist so they may pursue their passion. He has a tribute to Gaudi. Gaudi’s Ma Familia is in Barcelona and he was inspired by Gaudi after a visit with him in Barcelona. 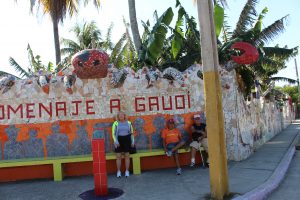