Stayed at the First Mayfair Hotel – 1653Kobenhvn The hotel was nice & had several restaurants and offered “free breakfast” with our Norwegian Cruise deal. FYI: It has steps into the hotel, so if you are in wheelchair, etc., but they have elevators inside the hotel.  Ate at the “Boston Rest.” at the hotel and “FRK, Barnes Kaelder” just down the street from the Mayfair Hotel. I prefer Barnes Kaelder.  “Boston” was convenient.

Q-Tips :  Joined our Grand tour “Free Tours” to hear how Copenhagen became the fantastic city it is today. Learn about the city’s founding father, the best place to get Danish smørrebrød, and why the Danes are called the happiest people in the world! PERHAPS due to the Danish or if something else, Mrs. Q found out : I found out that distinction now goes to: Finland. Finland might now have the happiest people because they are taken care of from birth to grave. But their taxes are very high, as in Denmark. Highlights of the Grand Tour include: The City Hall, Christiansborg palace, The old City Center, Nyhavn harbour,  The Royal Opera, The Royal Palace of Amalienborg.

We took the “Grand Tour of Copenhagen” thru offered by  “FREE TOURS.” “Copenhagenfreewalkingtours.com.” They meet on the steps of the City Hall on the city hall square. They wear bright green name badges and carry a bright green umbrella. Free, but please remember to tip the guides. This tour is a 3 hour walking tour during the heart of Copenhagen, historical facts and stories. Saw the changing of the guards, as they always do, but because “The Queen” was in residence they have changing of the guards with music. Yes, the streets are still cobble stone not paved. There are a million bicycles every where. It is very expensive to buy a car due to the fact they are taxed at 50% on the price of the car. Therefore, most people have bikes and they do have “bike lanes” and public transportation.

Unbelievably, they DO drive bikes in winter & use public transportation. I was told they don’t get a lot of snow more rain than snow in winter nor it doesn’t last long. The sun going down at 4 pm and rising again at 10 am – worst at winter solstice. 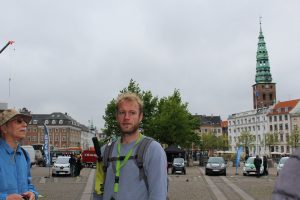 Magnus, our guide, was a local and interjected information that only a local would know. Yes, this was a “FREE” tour, but you should always tip your “free tour” guide. In restaurants an extra 25% is always added to your bill for the tip. If you received “extra ordinary service,” then tip accordingly.  We met on the stops of the City Hall on Radhuspladsen (city hall square) for our 3 hour walking tour.  Keep your eye peeled for the guides wearing the bright green hats and bright green umbrellas. 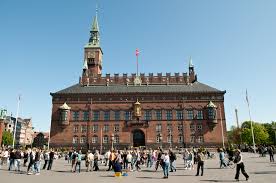 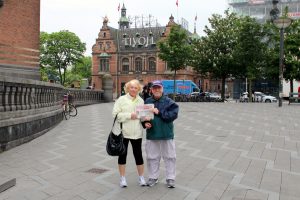 The sculpture of The Little Mermaid. 23 August 2013 she turned 100 years old. She looks pretty good for being 100.  Was inspired by Hans Christian Andersen’s fairy tale about a mermaid who gives up everything to be united with a young, handsome prince on land. Mrs. Q says: She looks good for 100 years old, don’t you think?

Every morning and evening she swims to the surface from the bottom of the sea and, perched on her rock in the water, she stares longingly towards the shore hoping to catch a glimpse of her beloved prince.

After your tour, you have time to visit Tivoli Gardens, The City Hall, Christiansborg palace, The old City Center, Nyhavn harbour, The Royal Opera, The Royal Palace of Amalienborg. All things you walked by and heard about during your tour.

Had a moment to talk with another guide after our tour and he said, “the USA has got it right with the new President Trump trying to changing some things and trying to get the economy going in the right way but had a reservation about him. He mentioned that the former President Obama would be a great guy to talk with and have a beer, but that’s it.”