Peggy  worked many years in the kitchen & made the best pizzas has died 1/2021.  All admired this marvelous woman who was 91 yrs. old. 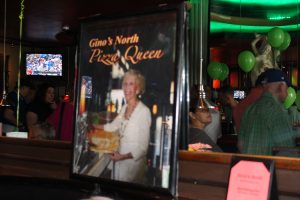 Peggy was definitely the “Pizza Queen.”

No, Gino’s North is not related to Gino’s chain restaurant.

Indoor dining.  They have done what a restaurant is supposed to do re C-19 regulations. Yes, even the statue is wearing a mask. Went again & In honor of the “National Eat your Vegetables Day”, started our meal by sharing the Antipasto Platter – Baby greens with salami, ham, artichoke hearts, provolone cheese, mortadella, and Kalamata olives with a side of Italian dressing and garlic bread.  Then we enjoyed  a very thin crust small pizza – Gino’s Special,  Includes Italian sausage, fresh mushrooms, green peppers, and onions.  Met some Gino regulars & had a good time catching up.

Q-tips say:  Going to Gino’s North is like going to “Cheers,”  without Norm at the bar.   Found out many of the regulars tending bar & in the kitchen are still at Gino’s N.  Glad they survived the Pandemic.

A great local place to eat, enjoy sports on TV, or just sit and enjoy the people you are with.  Good pizza, great drinks and service.

Mrs. Q says: Go and enjoy, we always do.

Mrs. Q says:  The Zoo was busy with families enjoying this Free Zoo. Go and enjoy, it may not be the largest Zoo due to lack of some animals but a great way to spend the day.  I miss the Elephants.
PS Lincoln Park Zoo has a great Ape House. So go and enjoy – say HI your distant relatives!

Calo’s Restaurant,  –  5341 N Clark St, Chicago IL, http://www.calorestaurant.com/  773-271-7725 –  Calo Ristorante has been family owned and operated since 1963, in the Andersonville neighborhood of Chicago. Calo offers a wide array of authentic Italian and American dishes, succulent steaks, veal, and chicken dishes. They are also known for their pizza, and fall-off-the-bone BBQ ribs.  Went around 4:00.  One worker there to clean (sanitize) tables immediately when guests are finished with their meals & servers wear masks.

The Q’s have been to Calo many times and have never been disappointed.  Excellent food, service by Jose & drinks.

Everything is outstanding including their Pasta Dishes & Pizza & Fish & all reasonably priced.  Mrs. Q says:  Drinks are very good. Had a wonderful time and delicious food at Calo.

Met long time friends for a visit at their house & enjoyed munchies & a drink. Then went to the Lizzadro Museum and then had a leisure drive thru Mt. Carmel Cemetery and dined at Bohemian Crystal – a modern European Czech rest.

Q’s had: Lamb and a Czech beer& Liver dumpling soup and Apricot Kolacky for dessert, which we took home.

Our friends had, if I remember correctly, the Breaded Pork Tenderloin – a Czech beer & a white wine. The Tenderloin was enough for two meals.

Posted in Chicago Rest. 2021 | Comments Off on Bohemian Crystal Rest.

Q-tips say: After a lovely visit with long time friends eating munchies & a drink, we were off to the Lizzadro Museum and then a drive thru the cemetery. Decided not to walk due to the weather being quite hot. Then off to Bohemian Crystal for dinner.

Mrs. Q says: Ever wonder where many of the gangsters/mobsters of yesterday are buried? Here. Mount Carmel Cemetery is also the final resting place of numerous local organized crime figures, the most notorious of these being Al Capone. Most – if not all – of the criminals buried at Mount Carmel were denied the blessing of a funeral in the Catholic Church. Out of necessity, most services were held in a morgue, funeral parlor or at graveside. Al Capone and his two brothers; Dean O’Banion, Hymie Weiss, the Terrible Genna Brothers, Vincent “The Schemer” Drucci, Michael Merlo, Frank Nitti, Sam Giancana and the graves of some of the undertakers who buried them.

He was originally buried at Mount Olivet Cemetery in Chicago. In 1950, Capone’s remains, along with those of his father, Gabriele, and brother, Salvatore, were moved to Mount Carmel Cemetery in Hillside, Illinois.

While Mount Carmel is renowned as one of the largest and most impressive Catholic cemeteries in Chicago, located at its center is the “jewel in the cemetery’s crown” – the exquisitely beautiful Mausoleum of the Bishops and Archbishops of Chicago.

This beautiful mausoleum required seven years to build and was completed in 1912. It has a stair-stepped pyramidal roof surmounted by a statue of the Archangel Gabriel, sounding his trumpet at the moment of the final resurrection.

Above the door is the Latin, “RESURRECTURIS,” which means “for those who will rise again.”

The mausoleum was designed as a Romanesque building with a domed Romanesque Classical chapel inside, complete with altar, religious murals, clerestory windows providing light and the crypts flanking the altar on either side. The papal and U.S. flags also flank the altar.

Archbishop James Edward Quigley, who commissioned the mausoleum, brought in one of the fore most religious architects of the day, Aristide Leonori, noted for his 1899 design of the Mount St. Sepulchre Franciscan Monastery in Washington, D.C.

For the mausoleum’s chapel interior, Leonori generously incorporated marble and mosaics to give the chapel a Roman look while still referencing Celtic, Nordic and Slavic saints in the design. This reflected the archdiocese’s many ethnic groups and national churches.

The most recent interment was Cardinal Joseph Bernard in after his death in 1996 from liver and pancreatic cancer.

Q-tips say: We enjoyed the visit to the museum with long time friends and then off to Bohemian Crystal Rest. for dinner.

There was a special exhibit from China along with the other items and photos in the museum.

Posted in Chgo Events | Comments Off on Lizzadro Lapidary Museum 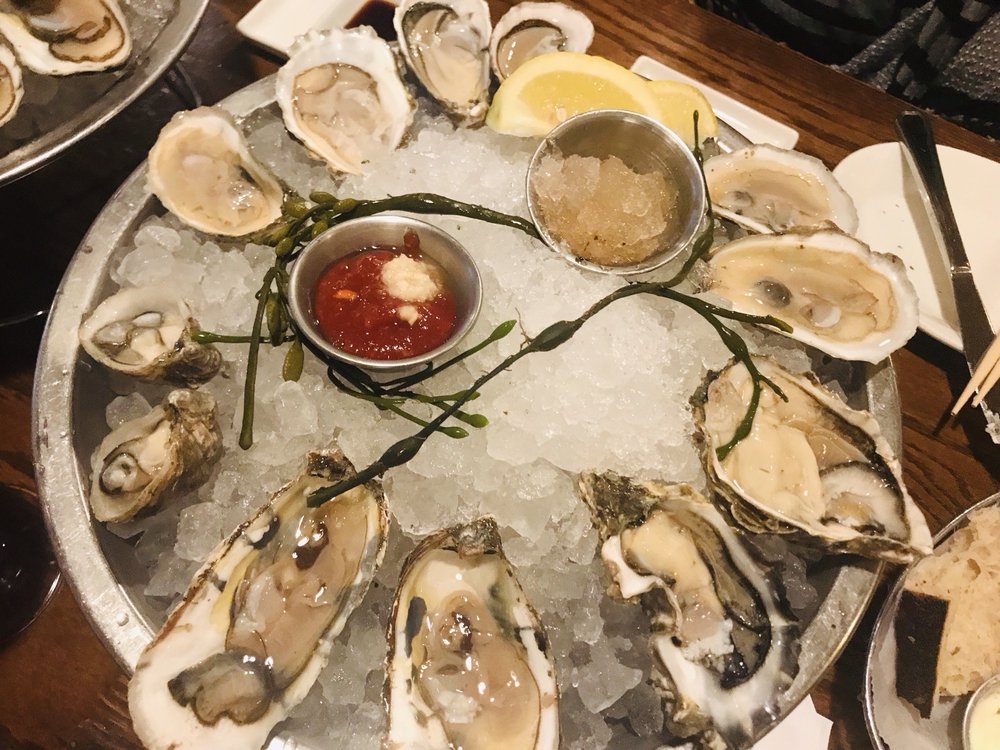 6/11/21 – Each Q started with a cup of  “Lobster Bisque ” and ordered a dozen West Coast oysters.  Then the Q’s had delicious Sautéed Maryland Soft Shell Crab – garlic butter. Glad the soft shell Crabs were still in season.    What a great way to celebrate the Mr.’s BD with going to his “first choice, ” Shaw’s.”  Happily we did NOT have to “Shuck” our own Oysters. Yippee!

Shaw’s has some of the best Oysters/Clams.  Fresh, Fresh & Fresh were the Oysters, delicious Bisque Soup, bread, & dinner entrees.

Q-Tips say: Shaw’s is one of the best Seafood, Sushi & Steak Restaurants around Chi-Town. The cost of the Oysters are on the high side but if you go for the “Oyster Happy Hour” they are more reasonably priced. You don’t find Seafood any fresher than at Shaw’s. Mrs. Q says:  It is one of the BEST restaurant not the least expensive – but worth it every penny.  And we don’t have to “Shuck” our own Oysters. Best Lobster Bisque Soup and awesome Sautéed Soft Shell Crab.

Mrs. Q says: Happy now that Chi-town is fully opened due to C-19. Rode her favorite bus, the #147, there & back. They still request that you wear your mask while on the bus.  Restaurants are having problems hiring workers, therefore the service & menus might not be the same as you might remember before the pandemic. The downtown area was humming with many people out and about enjoying the beautiful weather, dining & shopping scene in Chi-town.

Posted in Chicago Rest. 2021 | Comments Off on Shaw’s Crab House

6/10/21 – Q-tips say: We had great service by Jennifer & the bartender. Good food & a relaxing time after our Dental appts.

We began our meal with the Bang Bang Shrimp-crispy shrimp, tossed in
signature creamy, spicy sauce. We ordered all sauces on the side & a side of cocktail sauce. The Mr. had: Blackened Rainbow Trout with a side of Cole Slaw. Mrs. Q had: Scallops & Shrimp Skewer, firm texture scallops paired with jumbo shrimp and a side of mashed potatoes & asparagus. We shared the warm bread & enjoyed our visit & service.

Posted in Chicago Rest. 2021 | Comments Off on Bonefish Grill

The World Within – a series on Netflix & perhaps on PBS also

Cutting-edge science and captivating personal stories collide in this illuminating docuseries about the incredible workings of the human body.

Q-tips say: Yes, watch it. We did enjoy it! Mrs. Q says: She really enjoyed this series. Most of them were informative & interesting.

Heart, brain, eyes, blood, tears; “Human” uncovers not only the science behind how our bodies work, but how what’s inside powers every moment of what we do out in the world. Personal profiles of people from around the globe become entry points into deeper stories about how the body’s many systems function.

Episode 1 | Birth – Go on a journey with parents who are preparing for babies to see how our bodies create and sustain new life. Through their stories, we learn about what is fundamentally shared and absolutely unique about the experience of birth.

Episode 2 | Pulse – Dive into the world of an ice climber, a bus driver, a woman in labor and a senior dance club to show how the human heart and the circulatory system power our physical and emotional lives and create the pulsing rhythm of our world.

Episode 3 | Fuel – Through the worlds of a religious faster, an ultra-marathon runner, a farmer and a young girl beating allergies, go deep into the world of the human gut, which processes the fuel our bodies need to keep going.

Episode 4 | Defend – Look at a nature survivalist, rancher twins, a doctor who survived Ebola and the recipient of a cutting-edge cancer therapy to uncover the wildly advanced biology that keeps us alive against all odds.

Episode 5 | Sense – Dive into the stories of a pairs figure skating team, a perfumer, a cave explorer and a musician to decipher how different ways of sensing the world all create their own vivid and unique picture.

Episode 6 | React – Through the lens of a boxer, a first responder, a cell tower climber and a man with a bionic limb, go deep into the universe of the most powerful machine on earth: the human brain and the vast nervous system it controls.

Posted in Movies | Comments Off on Human

Parking: Street parking. After 5:00 we were told that people can park in the business parking lot next door. Drink are a little sparse – the glass is only 1/2 full when asked for drinks up and dirty ice on side. Not as generous as other restaurants.

Decent food & service. I had the GRILLED SALMON – topped with orange and dill garlic butter & asparagus with a side order of Caesar Salad. The Mr. had: BACKENED CATFISH – grilled with Cajun spices & asparagus & a cup of creamy broccoli soup. While the food & service was ok, don’t have a great desire to return real soon.

Posted in Chicago Restaurants | Comments Off on Fireside Rest.